There is something strangely liberating about arriving for the start of a huge bike ride knowing that you haven’t done enough training. If I’d followed the advice of Dennis Hunter (Youth coach of Hull Thursday Road Club, circa 1979), I would have ‘ridden my bloody bike’ a lot more that I had when I packed it away and set of for Albertville to do Act 1 of the 2012 Etape du Tour.

I’d only done three rides over 100k so far this year, and even if one of those was the Paris Roubaix it was still a long way from enough. Having done OK on that day in April, I’d convinced myself that I was reasonably fit, and would be OK for the mountains of France in July. Even so, I knew that a fantastic performance was totally out of the question, so decided that my tactic for the day would be to simply enjoy a grand day out on my bike.

As I turned off my alarm at five o’clock in the morning on the day of the race, I thought I could hear rain outside. This was a bitter surprise having enjoyed glorious sunshine as we signed on for our numbers the day before, when we’d spend the afternoon watching Wiggo take the yellow jersey, and the thin walls of our hotel had meant we’d heard the shouts of all the British fans in the rooms around us yelling at the television. As I started to get ready and set off down for my pre ride breakfast, my room mate looked out and confirmed that it was raining heavily, and there didn’t seem to be any breaks in the clouds rolling off the mountains.

We rode the kilometre of so to the start and filed into our start pen, and sat hoping that the rain would stop. It eased just as we set off, and the huge peleton rode gingerly out of town. It was much more settled than past Etapes I had ridden, and we covered the first twenty kilometres to the foot of the Col de Madeleine at a steady pace, sitting in with a large group. That was the only flat bit of road we rode on all day.

Not having any type of speedo or bike computer, I just relied on the stone kilometre markers at the side of the road to measure my progress. They seemed to come round reasonably quickly, but a look at my watch showed that the first kilometre had taken six minutes. This didn’t seem too bad, but the kilometre stone I passed next said ‘sommet 23km’ – over to hours of climbing before I was going to crest the first of four mountain peaks of the day. I was amazed to see a young neo pro in full AG2R kit sprint past me, then sprint through gaps as they formed in the huge group of riders ahead. The rain had given way to sunshine by now, and the air was hot and humid. By the time I’d got to within 5k of the top, I had to stop to take my rain jacket off, which at least allowed the fans to see my CCC jersey, something which they had plenty of time to do as I was really feeling the gradient by this time.

As ever, the top of the col was magnificent, with stunning views all around. Speeding down the other side, I realised I needed to put my sunglasses back on, but once I’d managed this, I found that they were still so steamed up and dirty that I had to take them back off just to see where I was going.

Next came the Col du Glandon, which was another climb of over two hours, with the last three kilometres into a strong block headwind, before climbing on to the last bit of the Col du Croix de Fer. Three cols done – and it was just time for lunch. I grabbed a bite to eat before taking a snap of probably the most scenic pissoir I’ve ever seen. I couldn’t resist making use of this before setting off down the other side. I don’t think I’ll ever have chance to empty my bladder with such a view ever again. 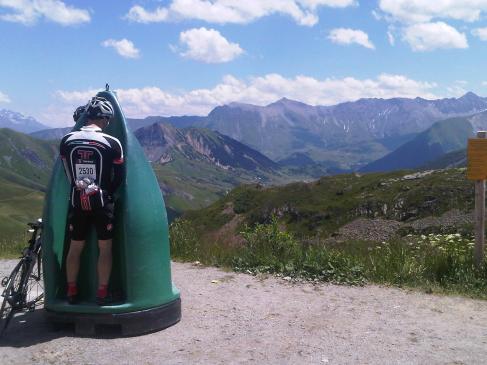 By now it was obvious that this ride was a lot harder than I had thought it would be and I knew that the rest of it would be tough. Even the 5.7k Col du Mollard was quite hard, then at last, we got to the final climb to La Toussiere.

This was actually the back of the Col du Croix de Fer which I had just descended, and was a hard climb despite ‘only’ being a cat 1. The crowds were quite big at this time, including a brass band playing a White Stripes song, accompanied by about twenty pensioners who were, to put it mildly, as pissed as farts. I’d misread a sign on the hill, and was furious when I saw the ‘arrive 3k’ sign, because I thought it was going to say 2k to go. I wanted to get off my bike and rip the sign up, but thought better of it and took advantage of a short bit of flat road to get my breath back before the one kilometre to go red kite came into view. This always brings on a surge of adrenalin, and I even managed a sprint and an ironic victory salute as I finally crossed the line, before finding our tour operators tent and stuffing myself with handfuls of crisps and about a litre of coke. We had a long wait for our transport back, when the coach driver went the wrong way twice, before he finally dropped us, starving and craving a few restorative beers, at our hotel.

There were 10000 entrants to the event, about 7500 made the start, and only 3000 made the time cut. The broom wagons had to allow an extra two hours, such was the level of attrition. I achieved my objective of a grand day out on my bike, but if there’s ever a next time, I’ll just make sure I do a bit more of JRYBB.

The Cappuccino Cycling Club is a group of friends from Harrogate who enjoy cycling in a relaxed way, that normally entails stopping for a coffee somewhere along the way. Ride distances are from 25miles upwards with some members taking part in local sportive events in the Yorkshire area.
View all posts by Cappuccino Cycling Club →
This entry was posted in Random Stuff, Ride Reports. Bookmark the permalink.
%d bloggers like this: